Does the window tint come with a warranty?
Yes. Most of our automotive films come with a lifetime warranty, which is backed by the manufacturer. It covers both product and labour in the event of the window tinting failing under normal use.

What are the major advantages of tinting?
The 5 BIG BENEFITS of Vehicle Window Tint are: How long does it take to tint my car?
Between two and three hours, depending on the type and size of the windows fitted in your car.

What can I expect to pay?
This will vary depending on the vehicle size, # of windows etc.

Will my tint Bubble?
Our Lifetime Warranty guarantees that your tint wonâ€™t bubble.

Will my tint fade or turn purple?
Only if the tint is dye-based will it turn purple or fade. None of our films are dye-based so you can be assured that no fading or purple colouring will occur.

How long will in take for my new window tint to fully dry?
It will take about 3 to 5 days for your new window film to fully dry. During the summer the film can dry in a few hours, but in the colder winter months, the film could take up to a few weeks to fully dry. It is important to remember that during this time the window will appear cloudy and there may be some small water bubbles. Don't worry about these bubbles, they are just caused by excess moisture trapped between the glass and the film forming a kind of 'blister'. Under no circumstances should you squeegee, prod, or poke these water blisters, they will disappear once all the water has evaporated. Please remember NOT to roll your tinted windows down until they are dry. If you do, the film may not cure properly to the window and could peel.

What is the best way to clean my tinted windows?
The best way to clean your tinted windows is by using a soft cloth or regular paper towel (not the brown, scratchy stuff) and soapy water. Stay away from ammonia based products such as windex, unless they are specially designed for aftermarket tint. Over time, the ammonia could react to the chemicals used in the film and cause blotchiness - yes, we have actually seen this happen. Stick to soap and water!

How does tinting actually work?
Window film is made out of an optically clear polyester with a very thin layer of tinting agents such as dyes and/or metals deposited onto the film. These layers are assembled and finished with a strong scratch-resistant coating. Window film is always applied to the inner surface of the glass which protects the film from the elements and flying debris outside the car. When applied to the inside surface of glass, window film provides significant solar insulation.

Window tint is available in many different shades to suit your preferences. It is a myth that window film has to be dark to be effective. Unlike sunglasses that do impair your ability to drive at night, window film is designed to reduce glare and not impede night-time driving.

Depending on the type and quality of tinting film applied to a window, these percentages change dramatically. Some films are more reflective, and others absorb more light. The number you will most commonly see is the VLT% (Visible Light Transmittance). Almost all the official names of films include the VLT% within it like Johnson HP Quantum 28.. VLT% tells you how much visible light is allowed to shine into the car, and also indirectly how dark the tint looks.

Tinting film doesn't just block visible light. It also blocks harmful cancer-causing ultra-violet (UV-A and UV-B) rays as well as infra-red (IR) rays that cause heat to build up in your car; however, how effective a film is in blocking these rays depends on the type of film, the manufacturer, and the quality of installation. 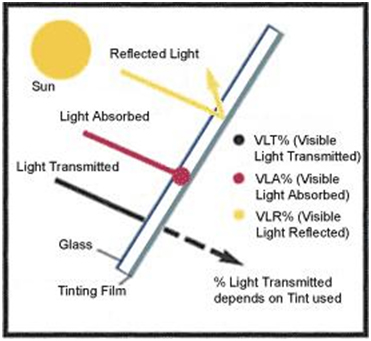 Was posted to Kingston in 1995 This business did my first tint job in 1995 when we purchased our First vehicle here. I have gone back to Flynn's every vehicle I have purchased and that includes the kids’ cars and trucks also. Staff is friendly and I always feel welcomed every time we are there. Pricing is more than fair and they get it right always. Recently has my company truck done and very impressed.